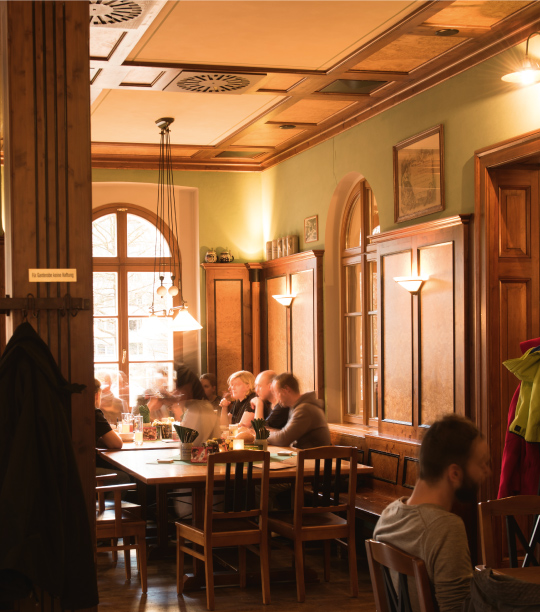 Welcome
to a Unique Journey

The Bayerischer Bahnhof is an exceptional location for every occasion. Travel through our individual rooms and explore their special ambience.

Our culinary program is as extraordinary as our location: traditional German cuisine, diversity, and seasonal trends. Our modern in-house brewery has re-established the Gose, a top fermented beer which is slightly sparkling and rich in vitamins(!), in Leipzig. Please try all our different creations for the Gose: the Regenschirm (umbrella) with a shot of caraway liqueur, the “Sonnenschirm” (parasol) with a shot of syrup, or the “Frauenfreundlicher” (women’s choice) with a shot of cherry brandy.

You could also enjoy one of our other beers fresh from the tap: the "Schaffner" (conductor), a pilsner, the "Kuppler" (operator), a top-fermented wheat beer, or the "Heizer" (stoker), a light and sweet, velvety dark beer specialty.

In our shop – next to the entrance – you find special souvenirs and extraordinary presents for your business partners and friends. Furthermore, a cosy table with five seats is located inside a nostalgic train carriage. In the separate area of the carriage you have an exclusive view from above over the whole colonnade hall.

The Biersiederei with its shiny copper tanks is located at the heart of the Gasthaus & Gosebrauerei Bayerischer Bahnhof.

Originally built as living quarters for the former restaurant owner, the Biersiederei now features two large brew vessels, in which the brewer starts a new brew two or three times a week. A glass panel on top of the podium allows you to witness the graining process. Additional brewing technology is located below the copper tanks. Feel free to ask our brewer about the secrets of beer brewing.

The arcades were originally designed as roofed hallway. Today, the 60 m² arcades function as additional dining area. The large panorama windows face the beergarden and give the arcades the atmosphere of a conservatory – ideal for your rendezvous or a business dinner with a classy touch.

The area where the Gosestube is located was formerly used as ticket office in the train station. The Gosestube has 76 seats and is furnished in reminiscence of an old-fashioned "Goseschänke," which is a historic Leipzig pub. An old tile stove, discovered during the remodelling phase, has found a new place here. The large tables of the Gosestube are well-suited for small groups of 10 to 15 persons.

These rooms are called "Schalander" after a room in a brewery used to trying beer and sitting down. The word probably comes from the French term "chalet" (little castle) and these rooms were once used as rest area for the brewery workers.

After the restoration of the Bayerischer Bahnhof, these rooms can seat up to 100 persons. The room invites you for a social gathering in a joyful atmosphere. A big sliding wall separates the area in two rooms and it can be completely opened for large events.

Our Beer garden is framed by large platane trees and has tables with over 400 seats in the sun and in the shade.

Enjoy the sunset with a delicious beer fresh from the tab. During summer our Beer garden opens already in the morning for brunch time. If it is sunny weather our Sunday, the Brauhaus-Brunch will also take place outside in the Beer garden. 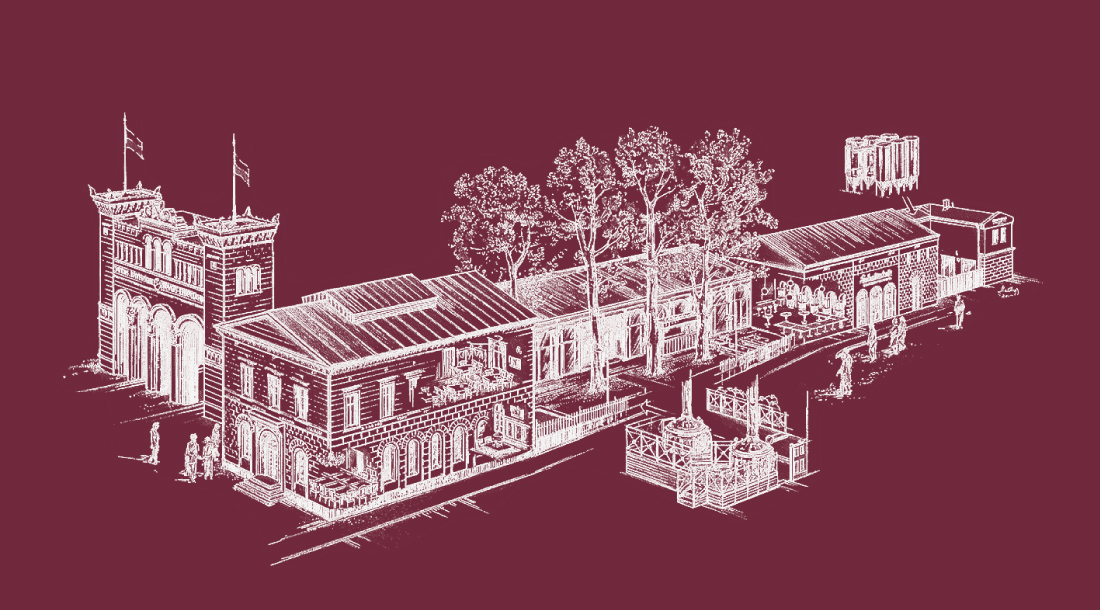